Pools require algaecide or algae-killing products (the same way insecticide kills insects) because like bathrooms and mold issues, it has just the right almost-moist environment for algae to spread. That's the long and short of it. The pH balance of your pool water should be just right or else algae growth is the natural consequence of your neglect.

It's neglect because you should put in a weekly algaecide and clarifier dosage to your pool to avoid algae formation. It should come with the rest of the chemicals you put in your pool to keep it clean. With that said, what's the best pool algaecide out there?

Algae are killed pretty effectively by chlorine. However, if there's a chemical imbalance with the pH levels of your pool, it becomes more susceptible to algae growth, chlorine, or no chlorine. Algaecides serve as your backup along with other pool cleaning efforts to keep algae growth from happening. You should definitely use pool algaecide on concrete pools because they're more at risk of algae formation due to their porous linings.

Getting quat or quaternary ammonium compounds, in particular, will surely break your own algae or make it susceptible enough to die from your pool's chlorine content. You can get quat at 10 percent and 50 percent strengths depending on your needs. You can also avail of sodium bromide or algaecides for different pool types, such as metallic pool algaecides and polymer pool algaecides.

How to Choose the Best Pool Booster Pump?

Here are the 5 best pool algaecide on the market to date. 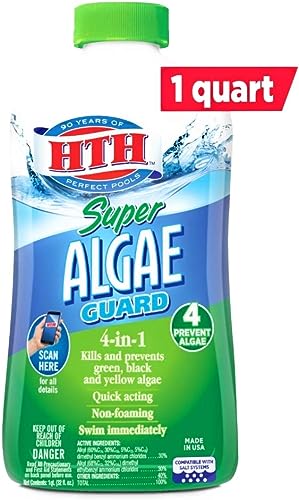 The HTH 67032 formula is a mid-tier algaecide relative to this shortlist of 5 quality algaecides we've gathered from Amazon.com. Some of its claims are truthful while other claims have been debunked by several customers, particularly its claim that it a non-foaming formula. However, it works quite well for easy, do-it-yourself pool care that coincides with your regular chlorine mix.

The main features of the HTH 67032 Super Algae Guard include a non-foaming algaecide formula that destroys algae quickly. It also claims to be able to kill and prevent future formation of various algae types, including green, mustard, and black algae on your pool. The fast-acting formula enables you to swim 15 minutes after the application of the algaecide to your pool, but this depends on how bad your algae infestation or spread is

The HTH is compatible with saltwater and vinyl-lined pool systems specifically. Customers particularly love how it won't fade vinyl pool liners and its ability to dissolve fast. It's what you depend on in order to maintain optimum pool pH to ensure your summertime fun when push comes to shove. The cons are some customers, even though they're a minority, complaining about the product producing foams even though it's allegedly a non-foaming formula of algaecide.

The Clorox Pool & Spa Green Algae Eliminator² ostensibly works on both spas and pools in getting rid and preventing algae formation on such bathing fixtures in your home. Additionally, in terms of tiers, it's probably the 2nd highest rated algaecide on this list next to the In The Swim Super Pool Algaecide. So even though it shares features and benefits with the HTH algaecide, the world-renowned Clorox brand does a little bit better on that front.

The Clorox Green Algaecide is another fast-acting brand of algaecide that treats and prevents green algae in particular as quickly as possible. It makes the algae more susceptible to getting killed by your pool's chlorine content and returns both pools and spas to their optimum pH levels. It's also compatible with salt pools and it's a non-foaming formula as well that proves suitable for various pool types, including metallic and polymer ones.

Clorox works best in maintaining the clarity of your water and it works on a brush and clean basis. Test it weekly and see the pool chemistry change rather quickly too. Although it's rated higher than the HTH, the Clorox Pool & Spa Green Algae Eliminator² is more limited to green algae while HTH at least covers mustard and black algae types as well (with varying results, but that's neither here nor there). There were customers complaining about how the Amazon formula is different from the formula listed on the bottle.

This is hands-down the highest-rated algaecide product on Amazon.com that we could find that doesn't merely have a handful of customers rating it. Those products skew the accuracy of the ratings by only having a small portion of verified users testing it. This algaecide offers no-foam action that allows you to safely swim your pool directly after using it, like the HTH but with no customers complaining about it reneging on the no-foam promise. It has a higher Amazon.com user score because it keeps the promises HTH makes.

It specifically contains 7.1 percent chelated copper, with the copper being chelated to ensure that staining is avoided. Furthermore, it's odorless and it has a non-foaming formula that most every customer reviewing it confirms as non-foaming indeed. Most importantly, it provides more consistency when it comes to fighting algae among the majority of the reviewers when compared to other algae products on this list and in the market at large.

The product is a concentrated formula, enabling you to get more out of every bottle because you're only using smaller amounts every time in order to get rid of algae. Like Clorox, it doesn't overpromise and specifically targets green algae in particular. However, there have been complaints by several users about how they've followed directions on how to use the In The Swim Super Pool Algaecide yet the algae keep on growing, suggesting either a defective product or certain conditions making In The Swim practically moot.

Kem-Tek KTK 50-0006 Pool and Spa Algaecide isn't as highly rated as In The Swim, Clorox, or HTH. However, even though it's the second "worst" algaecide on this list by virtue of user ratings, the poly-quat still made the cut to be on this list in the first place by combining clarifier features with the ability to be a long-lasting, non-foaming algaecide. It also claims to be safe with all filters and pool types to boot.

The main claim to fame of the Kem-Tek KTK 50-0006 Pool and Spa Algaecide is that it's a formula used for the treatment and continuous prevention of algae formation when it works. It's also a non-foaming algaecide that's safe with all pool and filter types while also helping clarify pool water to boot. This poly-quat is expensive but worth the price to keep that algae away.

In regards to the pros of Kem-Tek KTK 50-0006, it won't stain your pool plaster, it kills all types of algae like HTH (but actually fulfills the promise of being non-foam). As for the cons of Kem-Tek KTK 50-0006, it's most costly and you can get better treatment plus cost-effectiveness from the likes of In The Swim, Clorox, and HTH. Some customers also complain about the ingredients of this pool cleaner being non-EPA safe active ingredients, which lowers its score significantly. 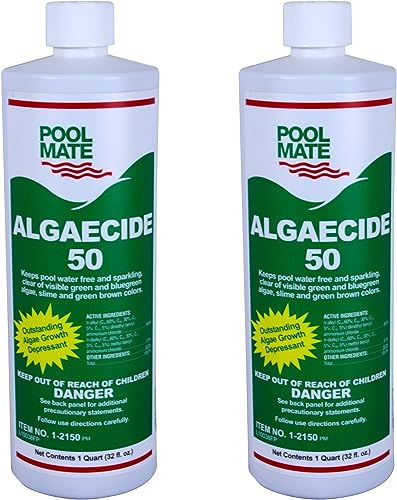 The Pool Mate 1-2150-02 Algaecide 50 is another non-metallic algaecide type that claims to work on everything, but as a result of broken promises it ended up scoring lower than In The Swim, Clorox, HTH, and Kem-Tek. It claims to kill any and all types of algae like HTH and Kem-Tek, but judging from the higher scores of either of those algaecides, it's slightly less effective at this claim than either of those products. It's still a worthwhile buy judging by its features.

The Pool Mate 1-2150-02 Algaecide 50 belongs on this list because it's a non-metallic algaecide that caters to pool types made of concrete, vinyl, fiberglass, gunite, and so forth. In addition to taking care of green, black, yellow, and mustard algae, it's also formulated to take care of pink algae, which none of the other formulas on this list can claim. It's also a preventative measure against algae growth that allows you to use the pool after 15 minutes of dosage.

The weekly dosage for the Pool Mate 1-2150-02 Algaecide 50 is 2-3 ounces per 10,000 gallons, which is a cost-effective conservation-mindful way to use and maximize a bottle of the product. Black algae spots are among the worst algae to deal with, and the Pool Mate product handles it like a dream. Alas, it gets minus points from a large number of customers complaining that it simply doesn't work and when the cloudy-white water clears, it has a tendency of leaving some green algae over, unlike its other contemporaries.

When dealing with algae using algaecides, it's important to remember that there are multiple types of algae out there. You have the traditional green algae, the more resilient mustard algae, and the hardest-to-deal-with type of black algae. Most traditional clarifiers and algaecides including chlorine can deal with algae formation. Special grades of algaecide are required to deal with concrete, metallic, and polymer pools. Clarifiers assist with pool clarity, polymer and metallic algaecides work with their specific pool types, and sodium bromide works well with chlorine to deal with severe algae cases.